Thursday, December 1
You are at:Home»News»Asia Bibi, who was convicted for blasphemy, finally wins her appeal in Pakistani court

The Pakistani court made a landmark decision today by releasing Asia Bibi. Asia Bibi, whose case dates back to 2010, was charged for insulting the last Islamic Prophet: Muhammad SAW.

Asia Bibi, who is Christian by religion, was given a death sentence in 2010 for insulting the Prophet PBUH. The case reveals that in 2010 court ruled against the  Christian woman who was sentenced to death in Pakistan for blasphemy, has now won her appeal and has been acquitted in a landmark ruling.

Asia Bibi was convicted in 2010 after being accused of insulting the Prophet Muhammad while she had an argument with her neighbor. She, along with a group of women were busy harvesting fruit at Sheikhupura in June 2009, when Asia drank water from a cup. On this, her neighbor said that she had contaminated the cup as she was unfaithful.

This caused other women to jump in the argument which soon became a fight. Asia admits that she defended herself and exchanged “hot words” yet she said nothing insulting against the Islamic Prophet.

Later she was beaten up at her home and then it is claimed that she accepted her crime. The police arrested her after making investigations. Since then she had kept to her stance that she had not said anything blasphemous.

In the court she was held guilty and was given death sentence. She had appealed against the ruling. Her case got stretched as she was supported by the then governor Punjab: Mr. Salman Taseer. Taseer when showed his support for her was shot dead by his own bodyguard. The bodyguard named Mumtaz Qadri was executed for his crime yet remains a hero for many in Pakistan.

Pakistan is an Islamic country where there is strong support for blasphemy. However Asia’s case was full of contradictions and there was no major proof to prove Asia guilty. International community also condemned the conviction of Asia.

After living in solitary confinement for 8 years, the chief Justice of Pakistan made a historic decision for Asia. Following were the remarks by the Chief Justice Saqib Nisar:

“The appeal is allowed. She has been acquitted. The judgment of high court as well as trial court is reversed. Her conviction is set aside.” 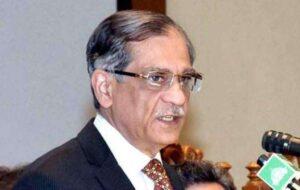 The Capital of the country, Islamabad, where the decision was made, was under high security today. It was feared that public would rise against the decision. And now roads have been blocked due to protests in different areas all over the country.

Asia, the mother of 4 children, is likely to leave the country as she has been granted asylum from many nations.