Monday, June 27
You are at:Home»Tech»How does a Hybrid Vehicle work?

Reaching 12 million worldwide in 2017, hybrid vehicles have become increasingly popular. And why shouldn’t they be? With the increasing prices of gas everyone would want a car that could save up around 50% of their fuel. Apart from this, Hybrid cars are environment friendly as they reduce emissions. We all might have sit in a hybrid vehicle or heard about it or seen it on a road and wonder how is it so silent, so smooth, has such smooth acceleration and how in the world does it save fuel?

We all know that hybrids use a battery pack but what else is there? Typically, there are 6 parts of a hybrid engine.

5) Electric Motors (motors attached to the wheels running on electricity) 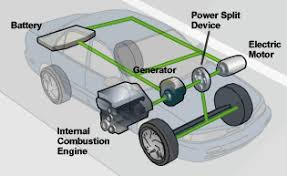 When the car is pulled from a stop, the battery powers the electric motors and the vehicle is not using fuel. Similarly, when the car is at a stop, all the components of the car are being powered by the battery and hence it does not use fuel. Now, what happens when the battery dies down? Well, that is when the engine comes into play, the engine uses fuel to power up the generator which then charges the battery. The battery is never left to die out completely but is rather recharged whenever it reaches a minimum level so that it lasts longer. Toyota claims that their hybrid battery pack can run for 300,000 kms!

When cruising, the hybrid only uses the engine because it works most efficiently at that time. Also the engine powers up the generator which charges the battery for later use.

The interesting part is when a hybrid car is accelerated heavily. This requires power, so now the hybrid uses both the engine and the electric motors to drive the car. This is only possible because of the power split device which works to combine the torque produced by both the engine and motors. The engine also performs the task of powering the generator at the same time. The electric motors can draw power from the battery or from the generator as needed.

The cleverest part of the hybrid is the regenerative braking system. When brakes are applied, or the foot is taken off the accelerator, the deceleration of the car means that it is losing kinetic energy. This kinetic energy is converted into electrical energy and then sent by electric motors to the power control unit. This energy is stored into the battery for later use. 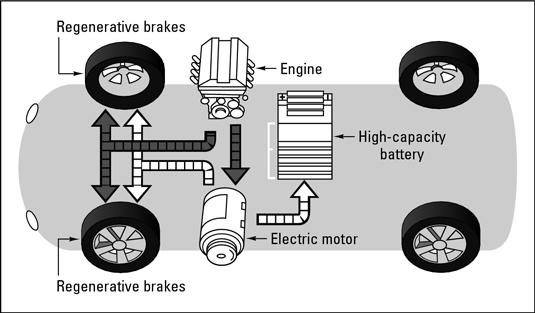 To answer the above questions, the silent drive of the hybrid is because its engine is powered off at low speeds. It has smooth and higher acceleration than other cars due to the electric motors which are more responsive and fast. And of course, it saves fuel by using the battery and engine in a very efficient way.