Thursday, September 29
You are at:Home»News»PM Imran Khan just shared a Naat on twitter and people can’t handle it!

The New Prime Minister of Pakistan, Imran Khan is in the limelight since he has won the 2018 general elections. Every day we catch up a news relating him either to politics or his personal life.

However, during the weekend, the PM went forth on social media to share a naat. A Naat is a religious recitation by the Muslims where they praise their last Prophet: Muhammad PBUH.

The Naat was recited by an Indonesian musical group   “Sabyan Gambus”. The vocalist is Nissa Sabyan. Nissa has gained popularity over the years via the social media platform.

The PM posted the Naat twice on his twitter account with the caption “Masha-Allah”. MashaAllah is an Arabic phrase used to praise someone. 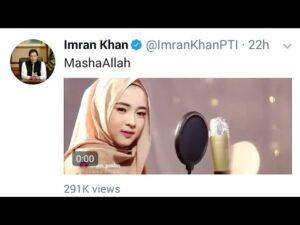 People on social media couldn’t handle the twice posting of the Naat on Twitter and thereby started trolling it. Many were of the view that his wife, Bushra Bibi has been using his account! There are many memes circulating upon it on the internet.