Thursday, December 1
You are at:Home»Tech»PS4 vs Xbox One – The Ultimate Battle

The Sony’s Playstation and Microsoft’s Xbox go head to head with every new model. Right now, the latest consoles available are the Playstation 4 and the Xbox one which were launched in 2013. The PS5 and the Xbox Scarlett are due to launch in 2020.

Both consoles have two versions. The PS4 slim supports HDR playback whereas the PS4 pro is more expensive and supports 4K. The Xbox One S supports 4K HDR and the more powerful Xbox One X not only support 4K but also has the capability of running games at 60 fps. So, in terms of display, the Xbox One has a slight edge.

In terms of price, the Xbox One S is the cheapest buy at $249 with 4K display because the PS4 slim does not offer 4K display at around the same price. Prices of both consoles keep fluctuating with many great bundle deals and discounts online. 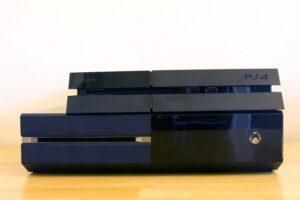 In terms of hardware, the PS4 has a sleek design and lightweight body. The console is also easy to carry around if you ever need to. The Xbox One X is slimmer than the Xbox One S but still does not out match the PS4.  Both consoles have a 500 GB storage that can be expanded by connecting an external hard drive. The PS4 users also have the added advantage of swapping their internal storage for a bigger one if need be. When it comes to controllers of the consoles, both controllers have a good grip and you can even customize your xbox controller with Xbox Design Lab. The PS4 controller has a reactive touchpad and is highly efficient. Moreover, the PS4 controllers come with micro USB charging whereas Xbox controllers rely on AA batteries or one can buy a $25 charging kit if he has to avoid replacing batteries. The PS4 can also support Virtual Reality (VR) with its Playstation VR headset which costs $299. The Xbox one on the other hand has no such feature and Microsoft does not intend to introduce it anytime soon either. With its advanced controller and VR support, PS4 wins the hardware battle. 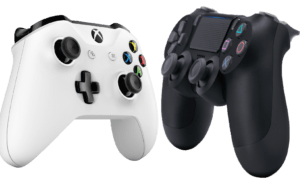 Both Consoles have an 8 core x68-64 AMD Jaguar processor with an AMD Radeon GPU and 8 GB RAM (DDR3 in Xbox one and DDR5 in PS4) but when it comes to games, the PS4 offers better graphics than the Xbox one.

In terms of user friendliness, the PS4 is more suitable as it provides a better interface and better options for sharing gameplay with friends.

PS4 is on top when it comes to its exclusive games. PS4 has the most hit games than any other console. Games like Unchartered 4, Marvel’s Spider-Man, Zero Dawn and God of War have made PS4 the ultimate choice for many gamers. Xbox One stands out with its exclusives like Forza Horizon 4, Gears of War 4, Halo 5, Sunset Overdrive and PlayerUnknown’s Battlegrounds. Sports games are available on both consoles but the PS4 outmatches the Xbox one in terms of fighting games like the Street Fighter V, Guilty Gear Xrd and King of Fighters XIV. Some popular games like the Fortnite: Battle Royale, Monster Hunter: World and Assassin’s Creed Odyssey are available for both consoles but still it is evident from the above information that PS4 comes out on top in terms of games aswell.

After much evaluation, we conclude that PS4 outmatches the Xbox one, but not by much. It takes the edge over the Xbox due to better line of exclusive games, better design and a better user interface, not to mention the VR support.