Thursday, September 29
You are at:Home»News»The marine life is badly suffering the ills of oil spill near Mubarak Village, Karachi, Pakistan

While no one is taking the responsibility of the oil spill along the Karachi’s costal belt nor the authorities have spur into action, the marine life continues to suffer its ills. Recently oil traces were seen above the sea water but gradually the deposition increased, and it was evident that it is an oil spill. 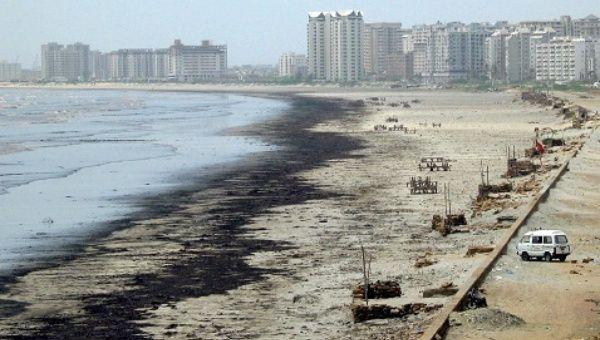 The World Wide Fund for Nature-The WWF started the investigation after they learnt that the oil spill had caused death of multiple fish. A dead green sea turtle also appeared on the shore covered in oil. Dr. Babar Khan, who is the regional director of the WWF said that we need to know the source of oil spill and need to clean up the mess. This can only be possible when authorities join-in hands and investigate the matter seriously.

According to the report issues by the environmental organization’s team: coastal habitat and marine biota have suffered badly from the oil spill and now dead bodies of these precious animals can be seen deposited by the coast of Mubbarak village and Sandspit. They also claimed that they had been able to collect the dead crustaceans and fish along the Hawksbay beach.

According to the local fishermen there, they were able to witness oil near Churna Island on Wednesday. By Thursday, oil spread towards Mubarak village and Sandspit beach.

The initial investigations by the WWF suggests that the oil must have been released couple of days before as by now it has turned into semi-solid tar. The oil spill has also created a havoc on Charna Island of Mubarak Village as a bad smell is being released into the environment.

Dr. Babar Khan said that WWF is well determined to know the sources of oil spill and thereby they have collected oil samples for fingerprinting. Oil fingerprinting is a technical method used to trace the oil source.

Muhammad Moazzam Khan, who is technical advisor for marine fisheries at WWF declares Churna Island as one of the most basic and sensitive habitat of marine life. Such an oil spill has massive and diverse effect on marine habitat.

Oil spills have lively effects till years. The oil covers the water, the rocks and coral reefs which does not enable the marine life to breathe. Also the sea birds get themselves covered in oil which disrupts their body temperature causing their death. Dolphins and whales also fall prey to effects of oil spill. When oil covers the fish eggs, the greatest loss is observed. Also, Oil spill is difficult to clean and is extremely costly.