World’s Longest Sea Bridge is opening this week in China

It is reported that the world longest sea bridge is set to finally open this very week. The bridge is connecting Hong Kong and Macau to the mainland Chinese city of Zhuhai. Chinese President Xi  will attend the ceremony in Zhuhai along with some other famous officials of Hong Kong and Macau.

The construction of this bridge cost $20 billion and took nine years to complete. This bridge is 55 kilometers long and was expected to open in 2016 but was delayed due to some invalid reasons presented by the critics and public of inert cities. This caused delays, but the bridge is now opening this very week. Some news sites reported that this bridge will be inaugurated on 23rd October 2018 and will open to traffic on 24 October 2018. 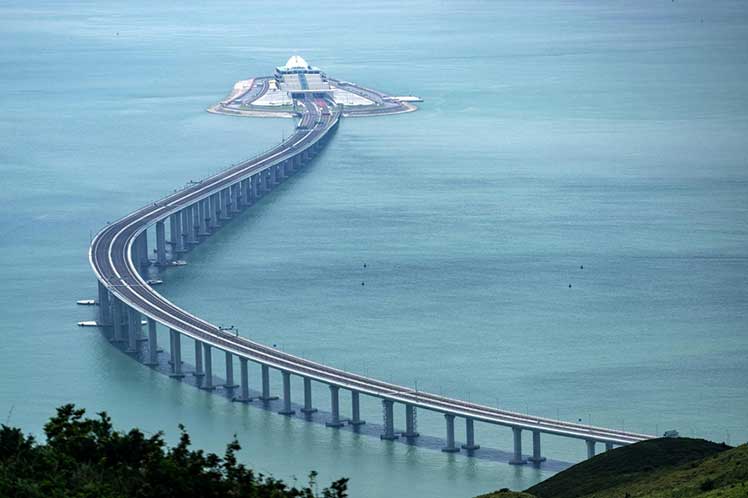 This bridge is an important element of China plan for Greater Bay Area, covering 56,500 square kilometers across southern China and it covers 11 cities which are home to combine 68 million people. It is also said that this bridge will help all the commuters and tourist to move around the region and it will cut the journey time from 3 hours to 30 minutes. The private car owners of Hong Kong will have to obtain a special permit to cross the bridge. The drivers can also park their cars at Hong Kong Port and can switch to Shuttle buses and other hire cars services.

This bridge represents a breathtaking view especially for those who see it from the plane. This bridge connects Hong Kong to China just like an umbilical cord.

Besides all the positive remarks of this bridge, it also faced a lot of criticism. Many critics said that more than $9 Billion which is a very huge amount was spent by Hong Kong to construct this bridge at the time when the city was suffering with extreme poverty and acute lack of public housing. Hong Kong had fund many other bridges, but it lacked benefit.

In 2016 when Hong Kong witnessed 6.7 million tourist arrivals, the bridge project came in severe disapproval because of the fear that either Macau or Zhuhai will be flooded by tourists from China. It was also claimed that the Chinese Government is using this bridge to drag the city which claims a semi-democratic government and independent judiciary.

The engineers have worked hard and with a lot of efforts to make this bridge withstand at a 8 magnitude earthquakes, super typhoon and strikes by super seized cargo vessels. The bridge is completed after incorporating 400,000 tons of steel which is 4.5 times more than that used in San Francisco’s Golden Gate Bridge. This bridge has a 6.7-kilometer underwater tunnel to avoid the busy shipping path. The tunnel runs between two artificial islands each island measuring 100,000 square meter and situated in comparatively shallow water.

Besides this, the bridge has other controversies. Even though the Hong Kong Government had tried their best to protect white dolphin and other aquatic life but still, they have the fear it has endangered their white dolphin.

Apart from that, the bridge has also faced a lot of condemnation over safety standards when it caused the death of 7 workers and several injured. Many subcontractors were also fined over this issue.