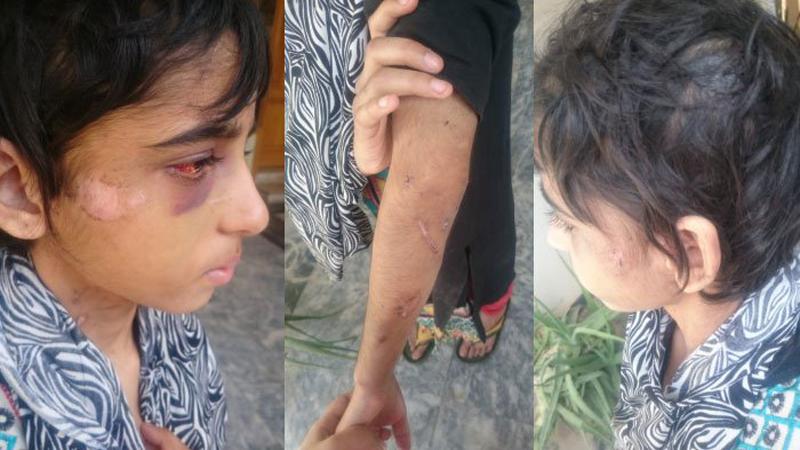 An 11-year-old juvenile maid Kinza was employed as a domestic helper in the residential area of Rawalpindi. The maid was hired by Major Ammara Riaz and her husband Dr. Mohsin Riaz where she suffered immense torture from her inhumane employers. It is shame for our society to call them civilized and well-qualified people.

It is also reported that the girl was often locked up in the bathroom. Previous pictures disclosed by the neighbors showed clot in the girl’s eye which was due to torture. The minor girl had to suffer the brutal thrash of waist belts, wires, ropes and cricket bat.

Although the girl was able to escape from the brutal environment and found shelter in one of the neighbor’s home who helped her to disclose her story. The little girl complained about the gruesome treatment by her employers. She explained that she was often tortured and beaten with waist belt, ropes and was kept starving and was also deprived from sleep, and if she tried to sleep, the woman harshly stepped on her chest to keep her awake.

The video and pictures of the minor went viral on social media and people completely reacted with condemnation and extreme anger. This caused the CPO Rawalpindi to look into the matter and an assistant Sub Inspector was also suspended over flawed investigation.

Dr. Shireen Mazari, the minister of Human rights continuously tweeted linked to this case and called the child and the father back from their hometown, Samundari to investigate and register the FIR. The girl was unwillingly taken away by her father and the father was reluctant to take any action against the abuse.

After complete investigation, the minor maid disclosed that she had been enduring the tortured by her employer since the past two years. Talking to a local news channel, Kinza’s sister revealed that initially everything regarding her employment went normally but things took a violent turn over the past two years and her sister was tortured and subjected to immense cruel treatment.

She further claimed that her sister did not want to go back home or work anywhere but instead she wanted to study.

Kinza’s uncle revealed that she was sent to Rawalpindi three years ago by her father to work as a domestic worker for the monthly wage of Rs 5000 per month and her father signed the bond paper under compulsion.

On the other hand, the father of the juvenile maid signed an affidavit that the little maid was willingly taken to her hometown and she received injuries after falling from the gate of the house.

The minister of Human rights Pakistan said we are keeping close eye to ensure justice for the little maid.